The May 14 Massacre in Gaza 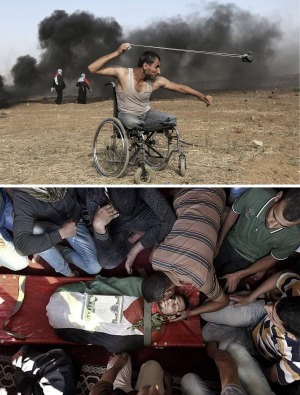 [reprinted from the May 16, 2018, issue of Tribune des Travailleurs (Workers Tribune), the weekly newspaper of the Democratic  Independent Workers Party of France]

Sixty dead in one day, many of them children. More than 2,400 wounded, brought down like rabbits by snipers quietly poised with their rifles behind the Israeli barbed wire. This is the record of this dark day of May 14, 2018.

Even the Israeli daily newspaper Haaretz  (May 15) was compelled to write that for a month and a half protests were carried out by “Palestinian people who were mostly unarmed and yet ended being killed by the dozens and wounded by the thousands.” Haaretz underscored the fact that throughout this period no soldier, no Israeli citizen, was wounded, but that Israel, meanwhile, multiplied “sniper fire against unarmed demonstrators, deadly fire.”

Haaretz described the protesters as “tens of thousands of desperate people who have neither a present nor a future and who have tried to sound a cry of alarm.” Haaretz noted that the footage on TV showed “the scale of a disaster faced by 2 million people, trapped and besieged in Gaza — horrible images that explain the real reasons behind the protests at the border fences.» Haaretz further noted, not without reason, that “lethal weapons will not discourage young people who have nothing to lose.”

And Haaretz went on to point out that, “people on both sides of the fence are the same age. On the one hand, the Israeli soldiers whose lives are not in danger in most cases, none of whom were wounded, who are free citizens, with a future ahead of them; and, facing them, young Gazans, generally disarmed, unprotected, mostly unemployed and hopeless as long as the siege of Gaza continues. Most of them only go to border demonstrations to shout and express their desperation.”

This is the reality described by a newspaper that is part of the Israeli establishment.

Even the Office of the United Nations High Commissioner for Human Rights denounced the fact that in Gaza today, “anyone can be killed” on the Palestinian side. And while some governments like that of South Africa had the minimum courage to recall their ambassador, French President Emmanuel Macron, criticized the “violence,” but his foreign minister, Jean-Yves  Le Drian, called for “restraint” on both sides. And Macron did not recall his ambassador.

Restraint? This is what many governments around the world are calling for. Restraint? Who can understand this? For 70 years since the Nakba — the Arabic term for the “catastrophe of 1948” — the Palestinian people have been denied all their rights. The generations of Palestinians who are demonstrating today in Gaza, in their vast majority, have been deprived of all hope and jobs. They are demanding to be able to return to the lands from which their grandparents and their great-grandparents were forcibly expelled.

Nothing can discourage the Palestinian people from demanding their legitimate right of return. Gaza is an open-air prison where, if one does not die under the bullets of the Israeli snipers, one dies slowly by suffocation. It’s a ghetto in which desperate Palestinians rise up and confront, at the risk of their lives, the Israeli gunfire and barbed wire. For 70 years, the Nakba has signified oppression, dispossession, expulsion, and discrimination.

In the columns of this newspaper [Tribune des Travailleurs/Workers Tribune] we recalled a few weeks ago the heroic uprising of the Warsaw Ghetto, where the Jewish people rose up admirably in April 1943, having been abandoned by everyone the world over. The world is now facing, under other conditions and in other forms, the uprising of the Gaza ghetto — an uprising that does not want to die.

Today, the Western governments are turning a blind eye to this uprising – just as they did 75 years ago. This is the price of their submission to U.S. imperialism and to its armed surrogate: the Israeli government.